Depicted after the famous photograph from WWII and the 7th Bond Tour, icon, I tried to mirror the event and give life to a “Snapshot in Time”, of one of the most famous photos in the world.

After many hours of research and endless period of viewing the movies online, I’ve come to this adaptation of the second flag raising atop Mount Suribachi on February 23, 1945.

Along with this piece, I will provide a book detailing the research, concept and production of this sculpture to the final finished work.  (Read more below) 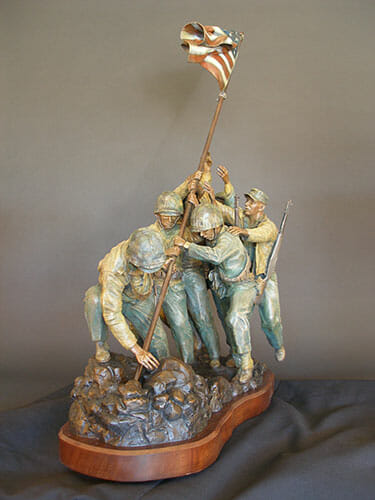 Dave was commissioned by a client to create a sculpture depicting the 2nd Flag Raising on Iwo Jima in 1945.  He thoroughly researched this project and after several months of viewing the film footage and photos he determined that John Bradley was not actually in the iconic photograph taken by Joe Rosenthal.  Dave discovered that it was Harold Schultz that was in the photo. John Bradley was involved in the 1st Flag Raising on Iwo Jima, however he was not part of hoisting the 2nd Flag as shown in the photograph.  Dave also has an extensive library filled with Marine Corps information and photos. He used this as well to research this project.

Dave has also spoken with many people at various antique and collectible art shows regarding who was actually in the photo.  Dave tried to convince people to view the photograph with an open mind and study the individuals shown and make their own determination.  Many people did not believe him and it has been an uphill climb to show people who was actually in the iconic photo taken by Joe Rosenthal. It has recently become a big topic of conversation.

We want to come across in a very humble and sensitive tone.  Want to honor what has already been depicted and the families of those involved.